Remember the time when some wise HR person had prophesied that employee engagement levels will soar if select individuals were allowed to take on the role of a senior executive for a day? The program probably went by the name of ‘One day as CEO’ or ‘One day as VP’. I had forgotten all about this rage until this mail began doing rounds on social media. 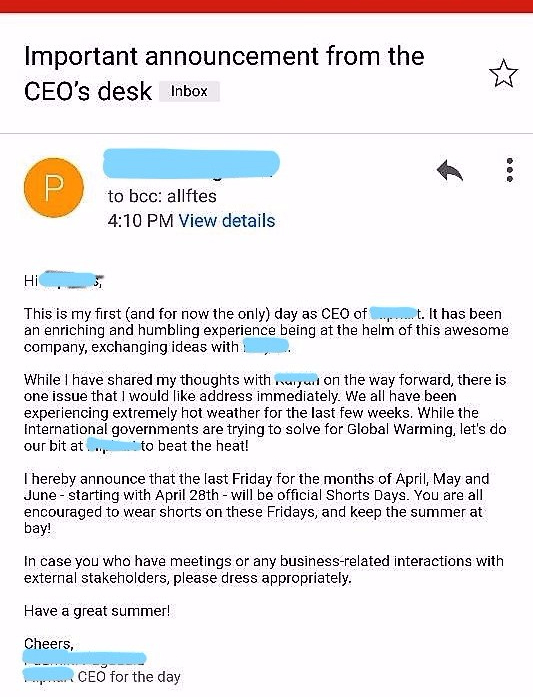 We could venture on a debate on whether dress code modification is an optimal utilization of spending a day as a CEO but that isn’t the intent of this post. The question that comes to my mind is – ‘Is this idea (of being a CEO) solving a problem?’

I would consider running this in my organization if it were addressing an issue or genuinely picking up engagement levels, but I’m not sure; just like I wasn’t when I first heard of it. It doesn’t take a genius to figure that the priorities of the executive council are not essentially the same as that of the folks on the floor. Initiatives that encourage interaction between the two parties were put in place to address this very need. And of course there is this function called ‘HR’ that also intervenes when required.

Does one need to go to the extent of a role play? Does it help or does one see it as a gimmick?

I’ll give you my view – the value add of doing such a thing is probably marginal or zero. It is probably the reason why it never took on. Not because CEO’s would get insecure. There are other ways to address employee needs. I would prefer those over this. So let’s put the program back where it belongs, on the back burner.